Teaching and Our Thoughts

As with all aircraft, launching and landing are done into wind. The wing is placed into an airstream, either by running or being pulled, or an existing wind. The wing moves up over the pilot into a position in which it can carry the passenger. The pilot is then lifted from the ground and, after a safety period, can sit down into his harness. Unlike skydivers, paragliders, like hang gliders, do not "jump" at any time during this process. There are two launching techniques used on higher ground[25] and one assisted launch technique used in flatland areas: 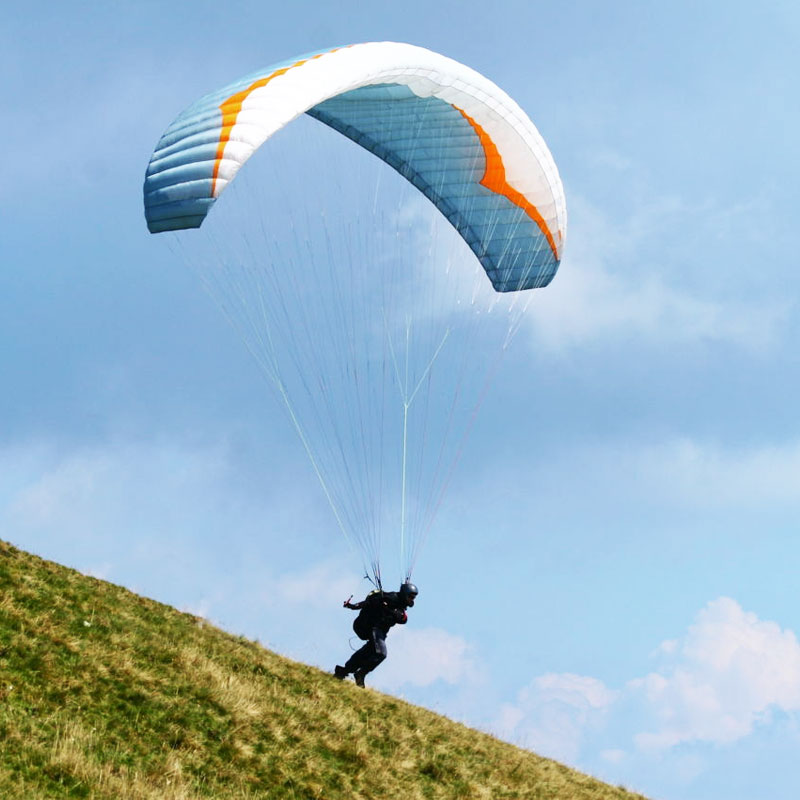 In low winds, the wing is inflated with a forward launch, where the pilot runs forward with the wing behind so that the air pressure generated by the forward movement inflates the wing.

It is often easier, because the pilot only has to run forward, but the pilot cannot see his wing until it is above him, where he has to check it in a very short time for correct inflation and untangled lines before the launch.

In higher winds, a reverse launch is used, with the pilot facing the wing to bring it up into a flying position, then turning around under the wing and running to complete the launch.Reverse launches have a number of advantages over a forward launch. It is more straightforward to inspect the wing and check if the lines are free as it leaves the ground. In the presence of wind, the pilot can be tugged toward the wing, and facing the wing makes it easier to resist this force and safer in case the pilot slips (as opposed to being dragged backwards). However, the movement pattern is more complex than forward launch, and the pilot has to hold the brakes in a correct way and turn to the correct side so he does not tangle the lines. These launches are normally attempted with a reasonable wind speed, making the ground speed required to pressurise the wing much lower – the pilot is initially launching while walking forwards as opposed to running backward.

Landing a paraglider, as with all unpowered aircraft which cannot abort a landing, involves some specific techniques and traffic patterns. 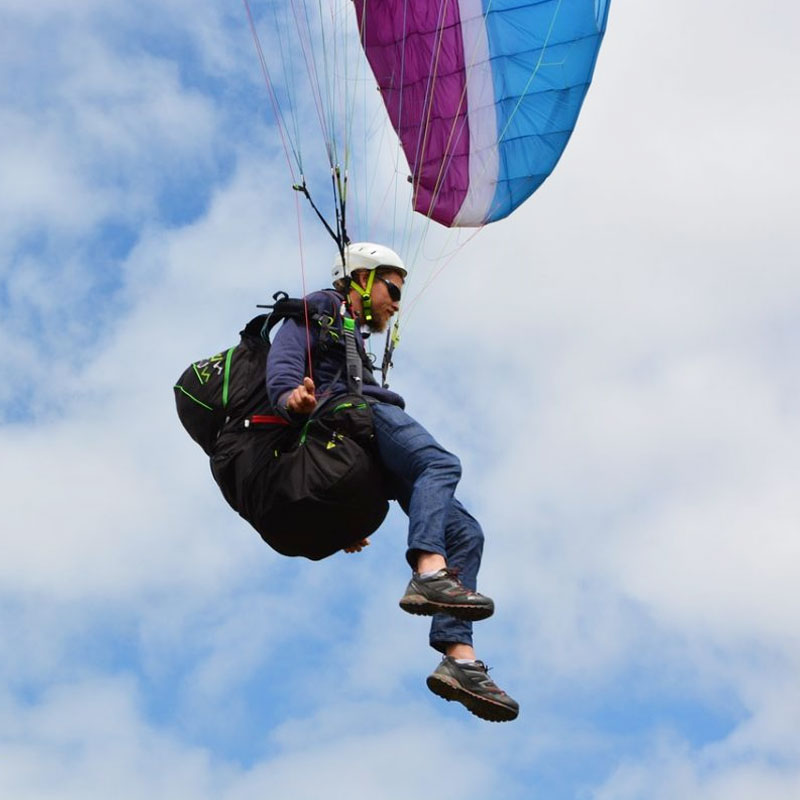 Unlike during launch, where coordination between multiple pilots is straightforward, landing involves more planning, because more than one pilot might have to land at the same time. Therefore a specific traffic pattern has been established. Pilots line up into a position above the airfield and to the side of the landing area, which is dependent on the wind direction, where they can lose height (if necessary) by flying circles. From this position, they follow the legs of a flightpath in a rectangular pattern to the landing zone: downwind leg, base leg, and final approach. This allows for synchronization between multiple pilots and reduces the risk of collisions, because a pilot can anticipate what other pilots around him are going to do next.

Landing involves lining up for an approach into wind and, just before touching down, "flaring" the wing to minimise vertical and/or horizontal speed. This consists of gently going from 0% brake at around two meters to 100% brake when touching down on the ground.

In light winds, some minor running is common. In moderate to medium headwinds, the landings can be without forward speed, or even going backwards with respect to the ground in strong winds, but this would usually mean that the conditions were too strong for that glider.

Additionally, at around four meters before touching ground, some momentary braking (50% for around two seconds) can be applied then released, thus using forward pendular momentum to gain speed for flaring more effectively and approaching the ground with minimal vertical speed.

For strong winds during landing, two techniques are common: the first, "flapping" the wing to make it lose performance and thus descend faster by alternatively braking and releasing around once per second (though the danger of inducing a stall during this manoeuvre makes it an "experts only" technique), and the second, collapsing the wing immediately after touchdown to avoid being dragged, by either braking at maximum or quickly turning around and pulling down the D-risers (the last set of risers from the leading edge).

When the sun warms the ground, it will warm some features more than others (such as rock faces or large buildings), and these set off thermals which rise through the air. Sometimes these may be a simple rising column of air; more often, they are blown sideways in the wind and will break off from the source, with a new thermal forming later. 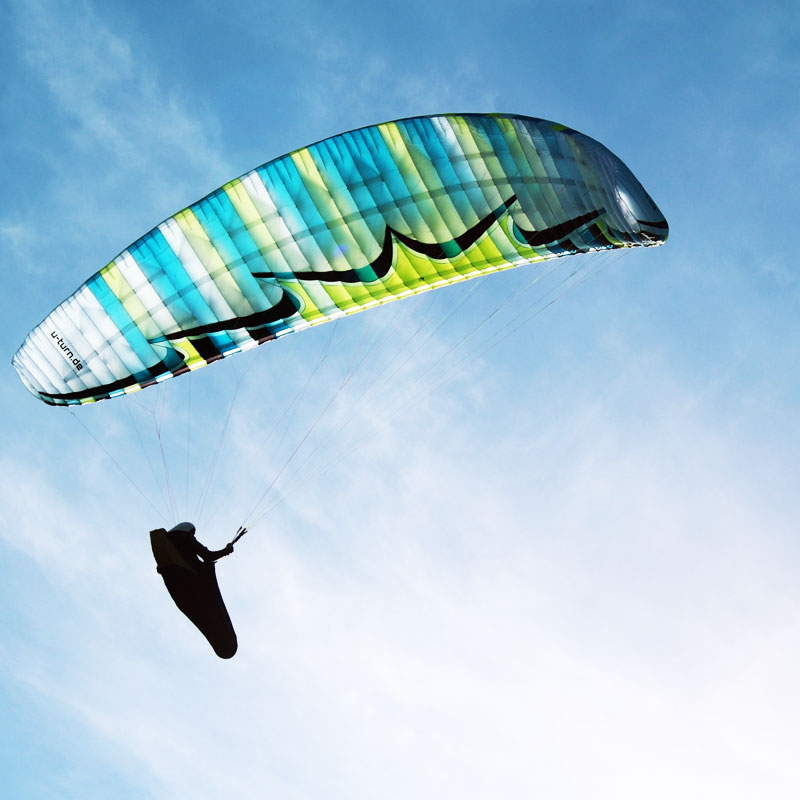 Once a pilot finds a thermal, he or she begins to fly in a circle, trying to center the circle on the strongest part of the thermal (the "core"), where the air is rising the fastest. Most pilots use a vario-altimeter ("vario"), which indicates climb rate with beeps and/or a visual display, to help core in on a thermal.

Often there is strong sink surrounding thermals, and there is also strong turbulence resulting in wing collapses as a pilot tries to enter a strong thermal. Good thermal flying is a skill that takes time to learn, but a good pilot can often core a thermal all the way to cloud base.

Once the skills of using thermals to gain altitude have been mastered, pilots can glide from one thermal to the next to go cross country. Having gained altitude in a thermal, a pilot glides down to the next available thermal.

Potential thermals can be identified by land features that typically generate thermals or by cumulus clouds, which mark the top of a rising column of warm, humid air as it reaches the dew point and condenses to form a cloud.

Since the shape of the wing (airfoil) is formed by the moving air entering and inflating the wing, in turbulent air, part or all of the wing can deflate (collapse). Piloting techniques referred to as "active flying" will greatly reduce the frequency and severity of deflations or collapses. On modern recreational wings, such deflations will normally recover without pilot intervention. In the event of a severe deflation, correct pilot input will speed recovery from a deflation, but incorrect pilot input may slow the return of the glider to normal flight, so pilot training and practice in correct response to deflations are necessary.

For the rare occasions when it is not possible to recover from a deflation (or from other threatening situations such as a spin), most pilots carry a reserve (rescue, emergency) parachute; however, most pilots never have cause to "throw" their reserve. Should a wing deflation occur at low altitude, i.e., shortly after takeoff or just before landing, the wing (paraglider) may not recover its correct structure rapidly enough to prevent an accident, with the pilot often not having enough altitude remaining to deploy a reserve parachute [with the minimum altitude for this being approximately 60 m (200 ft), but typical deployment to stabilization periods using up 120–180 m (400–600 ft) of altitude] successfully. Different packing methods of the reserve parachute affect its deploying time.

Low-altitude wing failure can result in serious injury or death due to the subsequent velocity of a ground impact where, paradoxically, a higher altitude failure may allow more time to regain some degree of control in the descent rate and, critically, deploy the reserve if needed. In-flight wing deflation and other hazards are minimized by flying a suitable glider and choosing appropriate weather conditions and locations for the pilot's skill and experience level.

The two main ways a paraglider gains height is to fly in rising columns of air known as thermals or fly into moving air that is being pushed upward due to terrain, e.g. mountains or hills. Paragliders can fly surprisingly high and in most countries are legally allowed to fly up to 10,000 feet or 3000 meters. Control of the Paraglider is achieved via a combination of weight shift and brake lines which adjust the trailing edge of the wing. This is similar to ailerons or the elevator on a conventional aircraft.

We have professional Flying and ground crew members. The Instructors have an experience of 14 years of Paragliding and Paramotor flying. The Chief Paragliding Instructor comes with a thorough aviation background. He has 18 years of Sailplane flying experience and is a holder of Pilot's Licence (Gliders) and Flight Instructor's Rating on Gliders.